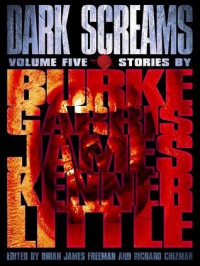 Included in this frightening volume:

Everything You've Always Wanted by Mick Garris was a truly horrible story.  He's being feted for the anniversary of the one film he made.  He's in a hotel suite in Indianapolis.  He showers & looks in the mirror at his naked body.  "That stomach:  How & when did it grow like this?  It was like some kind of flesh luggage."

Later he meets the former star of a different older movie.  "This creature was obviously female, as she had enormous round breasts climbing out of a scanty silk-and-sequin peekaboo gown that revealed more than anyone would want to see of her.  Her arms crinkled like crepe-paper gift wrap when they bent, at odds with the smooth immobile skin of her face & breasts....She was quite monstrously sexualized in her presentation, but about as desirable as a camel in a skirt."

The One & Only by J. Kenner was a haunting tale that took place in New Orleans, a voodoo capital.  "But when he looked at her--when he got lost in the hot ice of her eyes--he knew that she was right.  That she was his future, his past, his present."

The Land of Sunshine by Kealan Patrick Burke had a mute wife & a troubled husband tortured by her silence.  ..."though it had never bothered him before, her muteness now more than ever seemed like an infirmity destined to compound the inevitability of their dissolution."

Mechanical Gratitude by Del James will do anything to protect his '68 Camaro & does just that.  "It took corners like a shark cruising on asphalt."

The Playhouse by Bentley Little was a haunting little tale about a real estate agent who makes life changes by visiting a playhouse on a property she's listing.  "Wait a minute, she thought.  Mud?   Lois frowned.  The property had been foreclosed on close to two months ago.  It was summer.  The mixture of dirt & water should have long since dried out."

I would like to thank Random House Publishing Group - Hydra & NetGalley for a complimentary kindle copy of this book.  It did not change my opinion for this review.