The Bainbridge Killings by Rick Soper 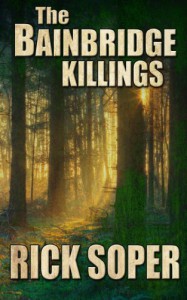 I received a complimentary Kindle copy of The Bainbridge Killings by Rick Soper, published by Rock Hard Press in an Amazon promotion.

That did not change my opinion for this review. I gave it four stars.

"Jon Stevens is in his prime, and he is forced to go to Bainbridge Island undercover to investigate the deaths of three couples. The local Sheriff has classified the deaths as suicides, but Stevens thinks they’re killings..."