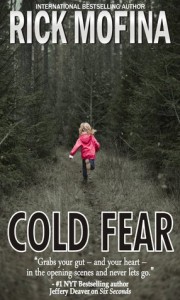 Cold Fear by Rick Mofina is a fast-moving suspense-filled thriller. I gave it four stars.

Ten-year-old Paige Baker got lost with her dog Kobee, a beagle, in Montana's backcountry in the isolated area known as Devil's Grasp. Her parents are Emily, a photographer, and Doug, a good looking ex-Marine. They had been fighting before she got separated from them.

Emily has a secret that she needs to share with her family. Her parents had died young. That was about all Doug knew about her past. He was a high school football coach and teacher.

Inspector Wladyslaw Sydowski of the San Francisco Homicide Detail is haunted by unsolved cases of murdered children. He was assigned to Paige's disappearance.

"Sydowski had a pleasing, solid six-foot-three, two-hundred-pound build, wavy salt-and-pepper hair touching off his dark complexion and rugged smile, which glinted because of his two gold-crowned teeth. Most people were intrigued by his smile. Unless, of course, they were a suspected killer."

I received a complimentary Kindle copy from Amazon. That did not change my opinion for this review.