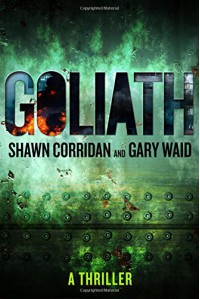 Goliath by Shawn Corridan, Gary Waid is a suspense-filled book about a giant Russian oil tanker. It was on a secret mission when a fire occurred and consumed the massive ship. Bennkah, Bravo-Echo-November-November-Kilo-Alpha-Hotel sent a Mayday call, when it ran aground on its maiden voyage. There were no survivors.

Because it kept my attention, I gave it four stars.

Bennkah means Goliath. There's also a 'Goliath-like' battle between Sonny and Dan. Sharpe-Shooters have the monetary and equipment advantage. Sonny with his Skeleton and Bones boats have the heart.

Who will be able to salvage this massive ship?

I received a complimentary copy from Oceanview Publishing and NetGalley. That did not change my opinion for this review.