The Daylight Marriage by Heidi Pitlor 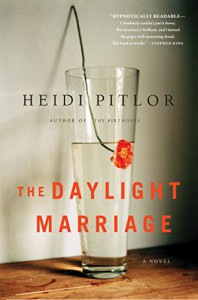 The Daylight Marriage by Heidi Pitlor, published by Algonquin Books of Chapel Hill is puzzling at times because of the use of the same character's different names. Because of that, I gave it four stars. It is a complex book, bleak & at times heartbreaking.

It's about a marriage & family coming apart because of falling into an 'ordinariness' pattern. Lovell talked to his wife Hannah nicknamed Tulip aka Tu, about an unpaid bill that had received three notices.

"Nothing got through to her these days...Is your life so busy that you can't remember to pay the bills? Can you tell me just what you do all day, every day?"

"'I've got work to do,' Lowell had said. It was a guillotine to the conversation."

Their loud arguments & Lovell's hitting the wall & breaking a perfume bottle were heard by their daughter Janine & son, Ethan.

Earlier he mentioned their relationship had cooled. This type of interaction could put frost bite into it. "Of course time & the shelf life of desire soon interfered."

The next day she was gone. Lowell gave the detective in charge of the case his signed alibi. He omitted their previous argument. Later it became necessary to mention it. He was mired in guilt.

Hannah herself had taken well to adolescence. Her daughter Janine was less fortunate. "But maybe to be happy at fourteen was to be happy too soon, to use up something that was, in the end, finite."

After Hannah disappeared, the news crews took up residence across the street from their home. They jostled each other when Lowell or the children ventured outside. He tried to remain patient but some of their questions were intrusive & rude. He also thought they were inane & irrelevant.

First her bracelet & later her wallet were found on Carson Beach. The wallet was empty except for her driver's license so the detectives told Lovell to cancel the credit cards. He called her friend Sophie only to discover that was where her former fiance Doug Bowen had proposed to her so the beach had a special meaning.

Janine at fifteen became almost unrecognizable to her father. She shaved her hair & talked about being a surrogate mother for her gay friends so they could have a baby with at least some of their genes. "She was always trying to fight some cause or injustice in some completely impractical way."

Hannah met a strange man named Jamie in Boston & gave him a ride to his job. She demonstrated extreme naivety & a lack of common sense to take this action. They were there early for his job & she was late to work so she called & made the excuse that Janine was sick to her co-workers. "Speaking to him was a little like looking into a fun-house mirror."

Even before Hannah left Lovell there was dissension between them. "Over time, her unending complaints became like sandpaper that scratched a big raw part of him. Each new round made him sting & wriggle away."

Later Janine also went missing. Lovell thought about doing a computer search on the name of the man suspected in several murders. He also thought about searching for the detective on the case to see what his solve rate was. He stopped himself. "It would be better to avoid any information with the potential to be emotionally destabilizing right now."

This suspense filled mystery was also a journey of love between individuals & of a family. I found the beginning slow but the second half moved quickly.

I would like to thank NetGalley & Algonquin Books for the free kindle copy. That did not influence my opinion of the book.